What is Flow? And why do you wanna to do a Showcase?

The Seattle area has a very vast and committed community dedicated to either just practicing or both practicing & performing with the Flow Arts. What are the Flow Arts you may ask? I can only explain it from my own perspective: 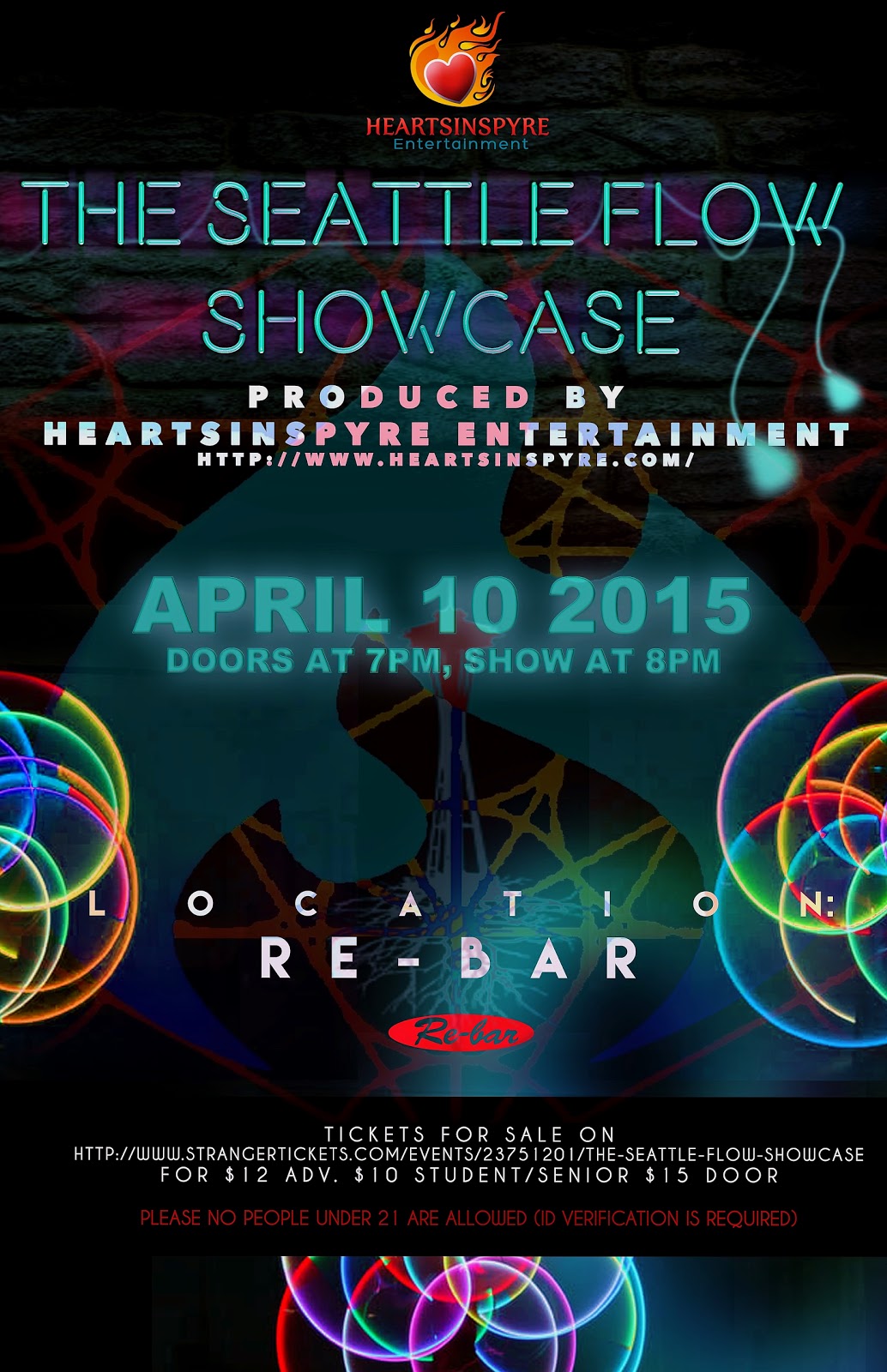 Back in 1997 I met Sue, the fire goddess, and friends as part of The Ever-Changing Festival of NOW, one of the earlier versions of the new modern day alternative circuses that have appeared as a response to reports of animal abuse in large historical big top style circus shows along with the decline of public use for the railroads. I was looking to revive my college passion for performing yet desired something more inspiring than traditional theatre with it's rigid director chairs where performers are moved about like chessboard pawns. I was also looking for a found family and group collaborative effort where everyone is equally respected and each person is recognized for the unique thoughts they have to offer and never shot down as if their vision doesn't matter. This is what I found in the Festival NOW at the River Farm and this is when I decided to run away and join the circus. 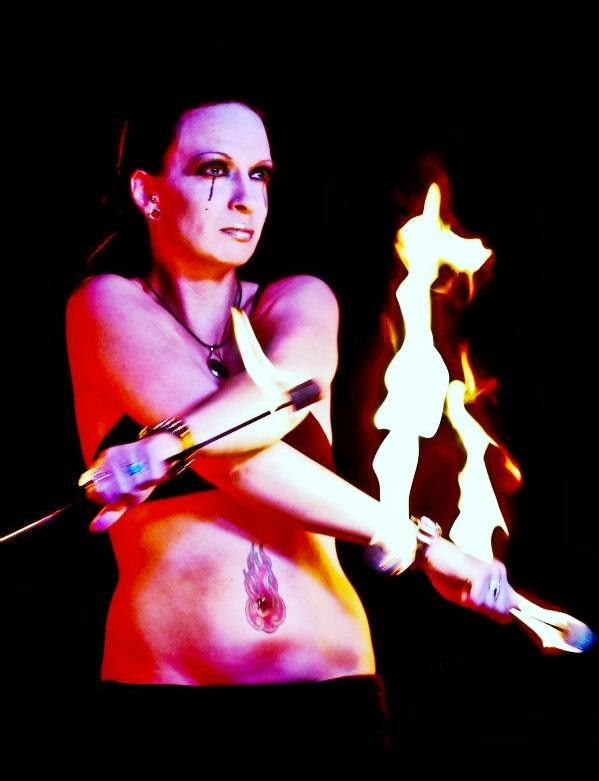 The circus was beautifully balanced in it had its day show and its night show. The day show was filled with clowns and happy, silly, hippyness! The night show was ritualistic dark and mysterious. The day show fit my water essence and inner childlike innocence that seemed to think the best of people, though intelligent I was exceptionally naive about the world still. The night show comprised of Sue evoking various Fire deities from around the world in Swedish afterwards appearing to offer herself to them body, mind, and spirit as she performed what's known as fleshing, body transfers with a torch in each hand, licking and extinguishing each in turn in her mouth, and then climaxing like a dragon breathing fire! This dark lustful territory she so tread stirred in me something both quite terrifying and delightful. I was instantly drawn to ask if I could be her apprentice. I had to know this magick, I had to become this Queen of Heaven!

So to me finding my Flow was very much about balancing an overabundance of water by learning to play with fire. Now I would say it incorporates all the elements, particularly that of ether which I'll get to. So there we were in Olympia, Wa. off the Evergreen College campus doing sketch comedy as clowns and hesitantly being given the gift of the art of fire performance. Sue was a bossy big sister, let me tell you, but I also understand precisely where she was coming from now in retrospect. We were allowed to participate in the Fire show but fleshing, the invocation, eating fire, and breathing was Sue's act. She would share the spotlight some but she encouraged us to find something else we could add more to it instead of taking over her bit and obviously watering it down. I decided I wanted to build bigger, heavier torches than the ones Sue used for blowing fire so I had these medieval looking versions of what most would call fire spinning clubs (like juggling pins but weighted evenly since they're not being tossed in hopes of catching the non-lit on fire end). Thanise had seen Marcy, if I remember her name correctly, perform with Tchkung! doing this thing where she had torches on the end of like dog chains that she spun around. We called them chains or "fire chains" for a lack of a better word that eventually came to be "poi" which still kinda annoys me until I go searching for props to buy then the word suits me nicely because it's a word that seperates the vague search engine results for "fire tools" into the desired "flow fire tools" by adding poi. 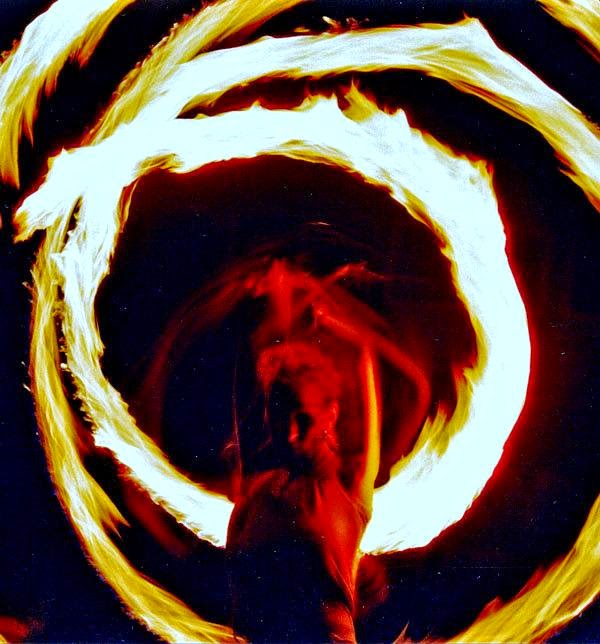 Eventually I picked up this cool concept yet to be called poi and started inventing new things to do with them that Thanise hadn't yet found, remembered seeing, or thought there was any possibility of... As revolutionary as I was I'll admit the youth or rather next generation of poi spinners have FAR, FAR, FAR surpassed me like quantum did for physicists of the Newton school of thought. I'll never forget the feeling of discovering that I could add an extra circle of rotation on each side turning a basic following or double timed figure 8 pattern into an almost double figure 8 or 1.5 now known as the 3 beat weave. It was a miraculous feeling thinking I had found an original never thought of before possibility and was accomplishing feats of the truly profound.. or at least until I went to the Rainbow Gathering later that year and discovered a few other fire dancers had discovered it as well, though not many only a select elite handful but that illusion soon was shot to hell when I went to my first Burning Man the following year. There I met Seraphina, a friend of an acquaintance from high school and college, Kim. Seraphina also did the 3 beat weave as did every other of the hundreds of fire dancers (notice I said hundreds instead of thousands because 1998 was my first year in the Fire Conclave and there was a mere 100 of us selected by Crimson in total as only 200 of those precious reflective laminents were made and available for all of Rosy's kids and Senior Staff members.. by last count that I'm aware of there were 2000 fire dancers in the Conclave which I'm sure has likely grown as it reflects the whole town erhm.. City, if not recognizable as it's own country now, and it's culture). Afterwards I came back to Seattle to start a fire dancing troupe with Seraphina, her roommate who was the cutest ball of suckie fuckie explosive energy who I instantly adored named Eros, Kim who became Kiyimbah and her roommate Mason who both had just begun then quickly completed mastering a 3 beat weave on unlit fire chains which was obviously soon made official and we took the name MagmaVOX (voice of the fire) with a logo of a television on fire as it represented the new formula for us as entertainers. 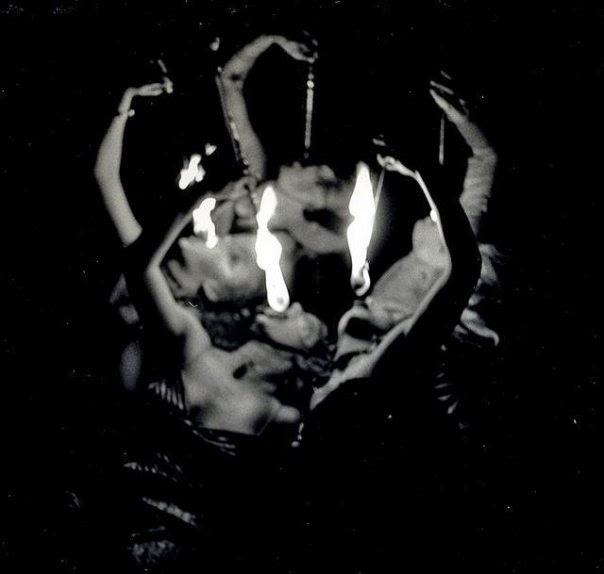 Fast forward 10 years, 2 circuses, and 2 other fire troupes later plus 3 years spent in the Bay area, and 5-6 years of working for Burning Man in DPW.. I'm back in Seattle and now there's equally as many Flow Artists in Seattle, not yet called "Flow Artists" but many were called "poi" spinners, and at last I yielded to the term because like their pretty practice poi (variations of socks or string with tennis balls or bean bags on the end which I suppose was for practicing with though I preferred using my fire chains because that thing was going to be on fire soon enough and I didn't want to get use to hitting myself because it should hurt, it's on fire.. I always imagined whenever I practiced which wasn't and still isn't to be honest, all that often) there were many who didn't light them on fire nor even aspire to do such. They just liked the flow or feel of it and that same connection I felt when I found the 3 beat weave but using softer options opened up doors to more complicated patterns once the fear of face wacking was defeated so they were doing all kinds of complicated stuff that to me just looked dangerous because hair is still attached to your head when a torch comes near it. They didn't do fire, they did glowsticks as the techno rave thing was apparently making a comeback minus the acid prerequisite, imagine that.. heh. There was also many of the usual jugglers around, some staffs which I had taken to in Magmavox as well, also hula hoopers, acro-balancers, and slack rope enthusiast. Amazing! It was the circus only too many to keep up with. Eventually these raver poi spinners needed a decent product that worked for longer than 12 hours and thus became the advent of Flowtoys, a regular spinners hard core version of LED glow stick poi and onward to the other common props all lit up like Christmas. To me this is where the term "Flow" was found or came about as Flowtoys became the standard for glow props like Coke is to soda pop thus you had fire poi or flow and eventually the whole art form began to be known as "Flow" as indeed it still has flow no matter what natural or hyper synthetic material it's made out of because the Flow comes from the person wielding the prop, not the tool.

This Thursday Asraiya is back as her newest clown character, Crackwhore Wendy, joining teammate Ronald McFondle to take on  their Jewish/Middle Eastern adversaries in the World Extreme Pencil Fighting League sketch comedy show happening at Re-bar! 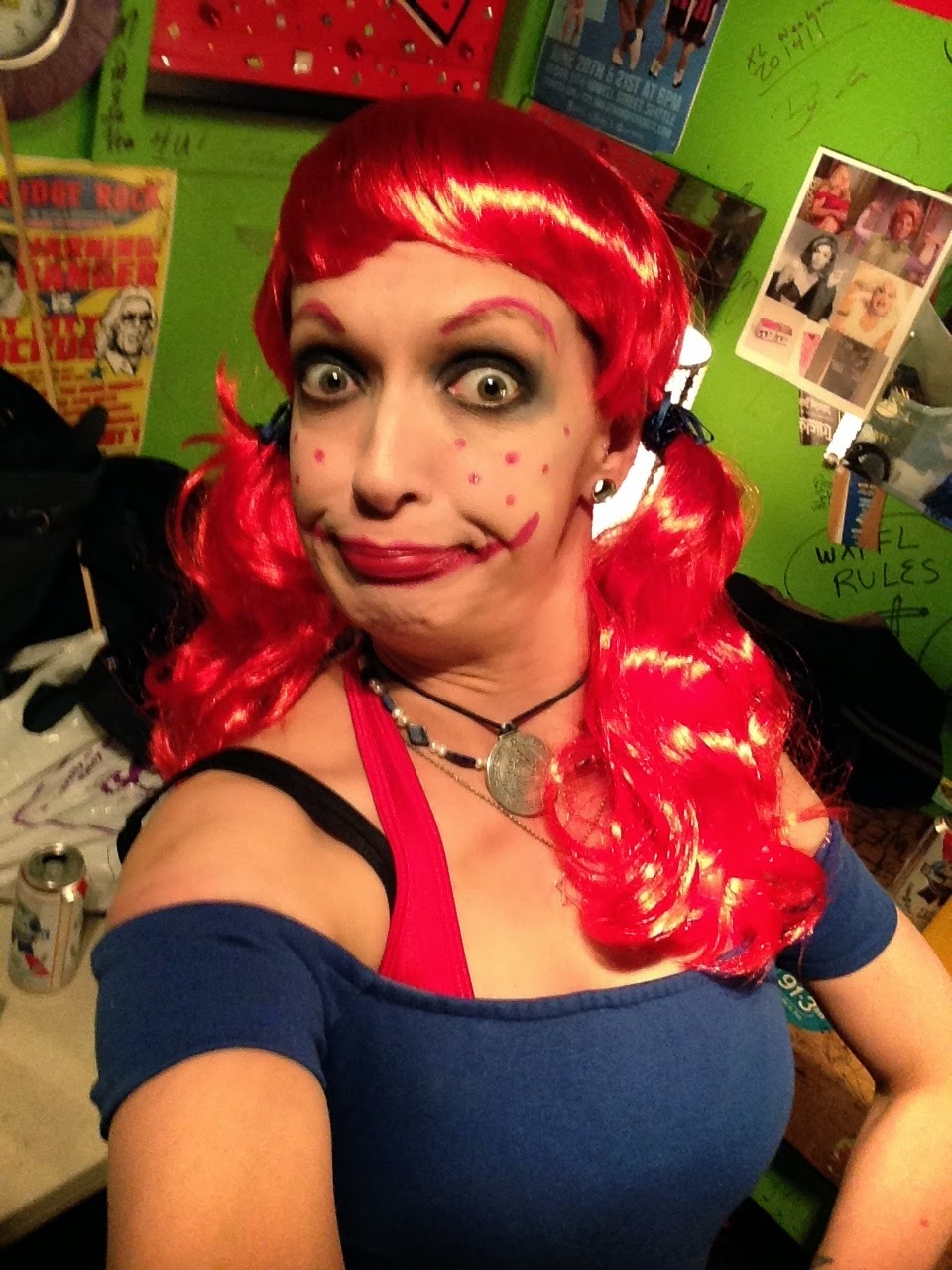 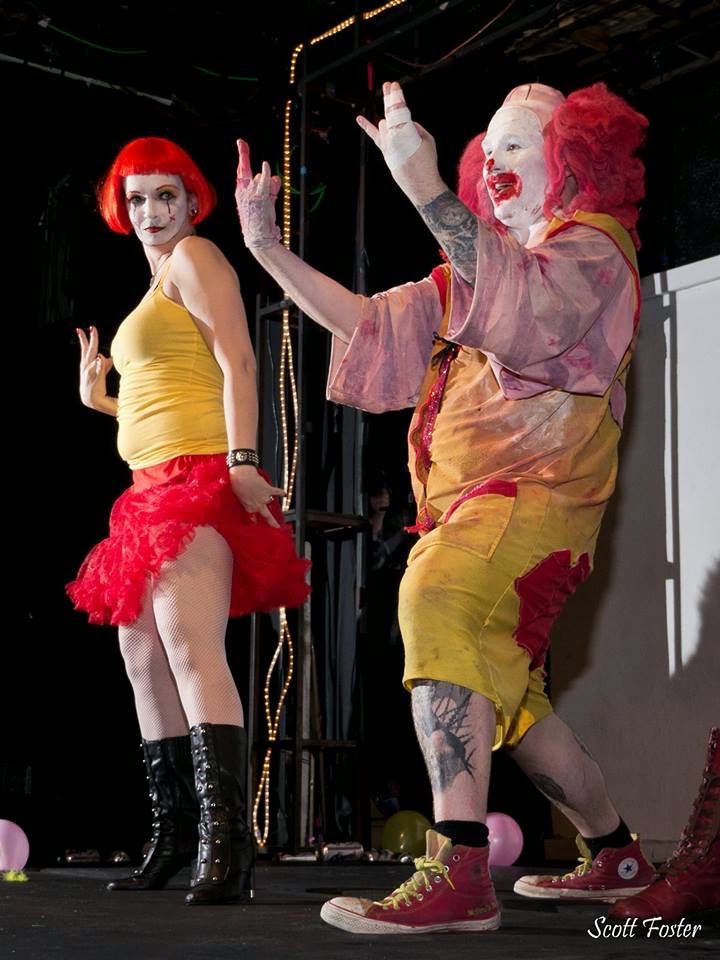 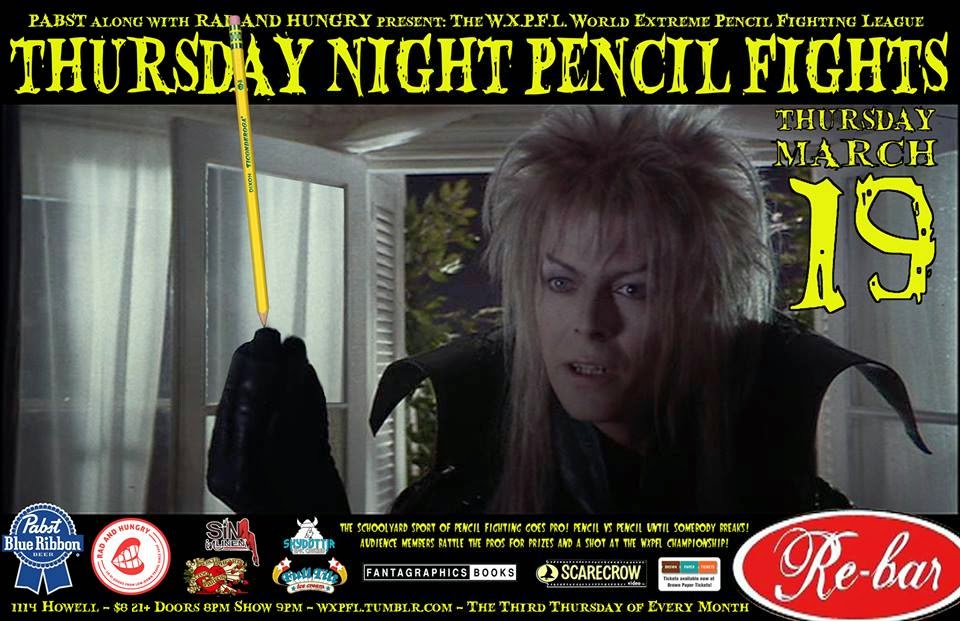 I realized my promo video is 5 years old so I'm in the process of having a new one made which is EXCITING! :) but in the meantime I'll park this moldy old one (promotional: long compilation) here from 2010 and be glad that at least I have something and I'm every bit as IN LOVE WITH WHAT I DO as I was the first time we met... 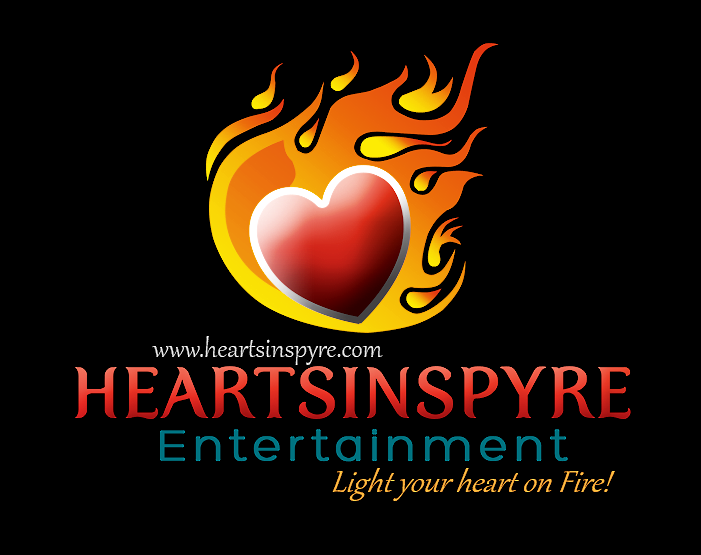